Dental implant placement with surgical stents is gaining increasing recognition worldwide. Every day we see many examples of successful cases.

That is why the mistakes when using surgical stents are especially interesting.

We bring to your attention a brief analysis of such a case, eliminating the issues of choosing a treatment strategy.

The initial situation is a fully edentulous upper jaw case. There is «sharp» ridge.

Four dental implants have been planned to be placed subcrestally.

It was supposed to use a pilot drilling protocol for 2.0mm drills. The use of fixation pins was not planned. The surgical stent was planned with support on the soft tissue only in the area of ​​the alveolar ridge. Bone reduction / correction was not planned. 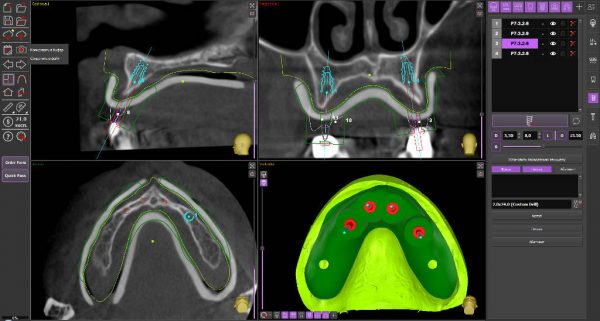 As you can see in the picture, due to anatomical features, drilling direction of the pilot hole was planned at an acute angle to the surface of the cortical bone. Almost tangent. 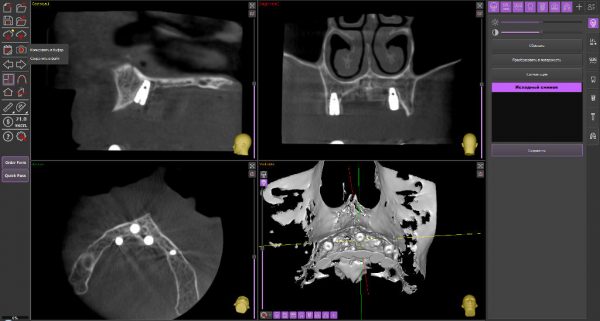 As a result, the implants were installed incorrectly, with a significant offset from the planned position.

It is obvious that during drilling, the pilot drill shifted along the cortical bone.

– non-optimal configuration of the surgical guide is also a mistake.

What could be done to prevent such errors?

One of the solutions is to use fixation pins. Many specialists do not use fixation pins for an upper jaw guides, believing that support on a hard palate is enough. It is recommended to make a control hole for the finger on the surgical guide surface adjacent to the hard palate to control the guide during the drilling. As you can see in this case, the guide based on the alveolar ridge mucosa only. Inadequate support area of ​​the surgical guide can also be attributed to errors.

A few words about the so-called fully guided protocols and drill sets for it. Using such protocols and kits would significantly reduce the risks of these kinds of mistakes.

The first step of the full drilling protocols is the use of smoothing and cortical drills to create appropriate drilling conditions.